Beyond The Wire - A Year In Review

As 2021 draws to a close and our team look forward to a short break for Christmas we thought we would see out 2021 with an end of year review to celebrate some of the accomplishments we've achieved and the difficulties we've faced. The past year has been an important one for Beyond The Wire, after launching to Early Access in the last quarter of 2020 it was important to evolve the game through large expansions to increase available content as well as establishing the direction for the game. With two expansions adding major factions and pivotal fields of battle we're proud to have been able to deliver new experiences and pay homage to some of WW1's most infamous moments. But new content and changes to the game haven't been the only progress that's been achieved this year. Our internal processes and update preparation has also evolved, allowing us to streamline development tasks and create easier routes to large updates. Making use of our amazing community to run large scale, public testing prior to expansions and big updates has given the development team invaluable opportunities to identify performance problems and other issues which we've been able to tackle before updates release. As Beyond The Wire is the first title we've worked on these types of processes and best-practices have been massive in helping us improve internally to deliver with each release. With 2022 looking to be even bigger and better - we're excited to step up and take our work to the next level.

We kicked off 2021 by reviewing the roadmap for Beyond The Wire and the team wanted to commit to keeping our plans up to date publicly for our community to see where the game was heading. With Early Access being an open development process we tried to ensure that the route ahead was communicated clearly to our current and future playerbase. The release of our major content pieces have been tied to public updates to our roadmap in an attempt to show everyone the next milestones and give a better understanding of the general aims for Beyond The Wire. Our two Operations that released in 2021 took major investments from development, and in some cases, had an impact on the plans we had revealed in the various versions of the roadmap. Throughout this year all departments met and discussed what was achievable with each expansion as well as committing to a complete package of content that we want to deliver for 1.0 release. As a result of these discussions and the live development of the game our roadmap has been updated several times and our community have been able to see those decisions reflected in the four versions that we published. Eventually, after several long meetings we were able to deliver a complete Early Access roadmap in the last quarter of this year, showing our playerbase an exact reflection of the goals for the course of development up until 1.0 launch. While some aspects of development have been delayed due to unexpected growth in scope and investment, we have ensured our community is updated as soon as possible on these delays. We were able to understand the disappointment of these delays and took advantage of the opportunities to include additional content and changes that we had been unable to commit to in the roadmap. We will be continuing to publish updated roadmaps in the future when needed so the community can be reassured they are involved every step of the way.

Part of our efforts to deliver new content this year has been to identify unique parts of armies that would offer interesting gameplay and visual dimensions to Beyond The Wire. A large part of the work done this year has been to include these new aspects to teams so that players have options of sub-factions and unique, year determined loadouts to further enhance the historical authenticity which continues to be a core pillar of Beyond The Wire. From early war regiments to sub-units sitting under the command of larger factions, the armies in Beyond The Wire have been expanded upon this year to offer more authentic representations on our Fields of Battle. The first example of this system arrived in Operation II: For King and Country where the 369th Infantry Regiment were introduced to fight alongside the army of the French Republic. Players were able to deploy as either the Harlem Hellfighters or support with French Infantry sections on Séchault during the Meuse-Argonne offensive. Taking this intention to all of our factions the game designers, historical advisors and 3d modellers have worked this year to identify additional options that can be included to the rest of the armies. Since Operation II release Beyond The Wire has introduced multiple sub-factions across several maps, all determined by the gameplay layer and the year it is set. We are proud to have included The Harlem Hellfighters, Jäger-Battalion, Chasseurs Alpins, Royal Newfoundland Regiment and Jäger-Battalion, Army Detachment Gaede into the game this year. While these sub-factions appear in various forms throughout the game their impact on gameplay and atmosphere has gone a long way to help build the landscape for the game.

One of the disappointments for 2021 has been the delay on our progression and customization system. The development work began early this year to build a brand new system that would take a player's game-to-game progress and reward new customization pieces that player's could then use to add their personal touch to their soldier in-game. Our intention will always be respectful of the period and our main goal is to remain historically authentic. While the art teams worked to create uniform and facial options the engineering department have been tackling the major programming effort to build this complex system from scratch. The code-base we've used to build the game had no functionality for such a system that would track and collect a plethora of player stats which would then feed into a players profile, issuing rewards and new tasks across their playtime. Given the building of such a system needed a new foundation of how player actions are tracked. the task has grown exponentially which we had not foreseen. With each new target achieved for our engineers, a new web of problems arose needing even more attention and time. Ever since the system has been started it's easily been the biggest work load for our programmers this year, all the while still having to deal with all the other development requirements. Further delays have been needed and as we close the year out the system is now expected for release in Spring 2022. While the pushing back of this major feature has been disappointing for all of us, the engineering team have still had major successes in their work on the system up to now, which included a complete overhaul of player and team stats. Updates 0.13 & 0.14 included the brand new scoreboard - which now rewards players for almost every action that has a positive impact on the round. Our players now see their influence on a round in whatever role they play, with scores being accumulated for combat, team and objective contributions. Developing, testing and implementing this system is major success for the development team as it has opened the door for the progression system to be introduced which will track each of these actions, contributing to the progression players see from each and every game played. 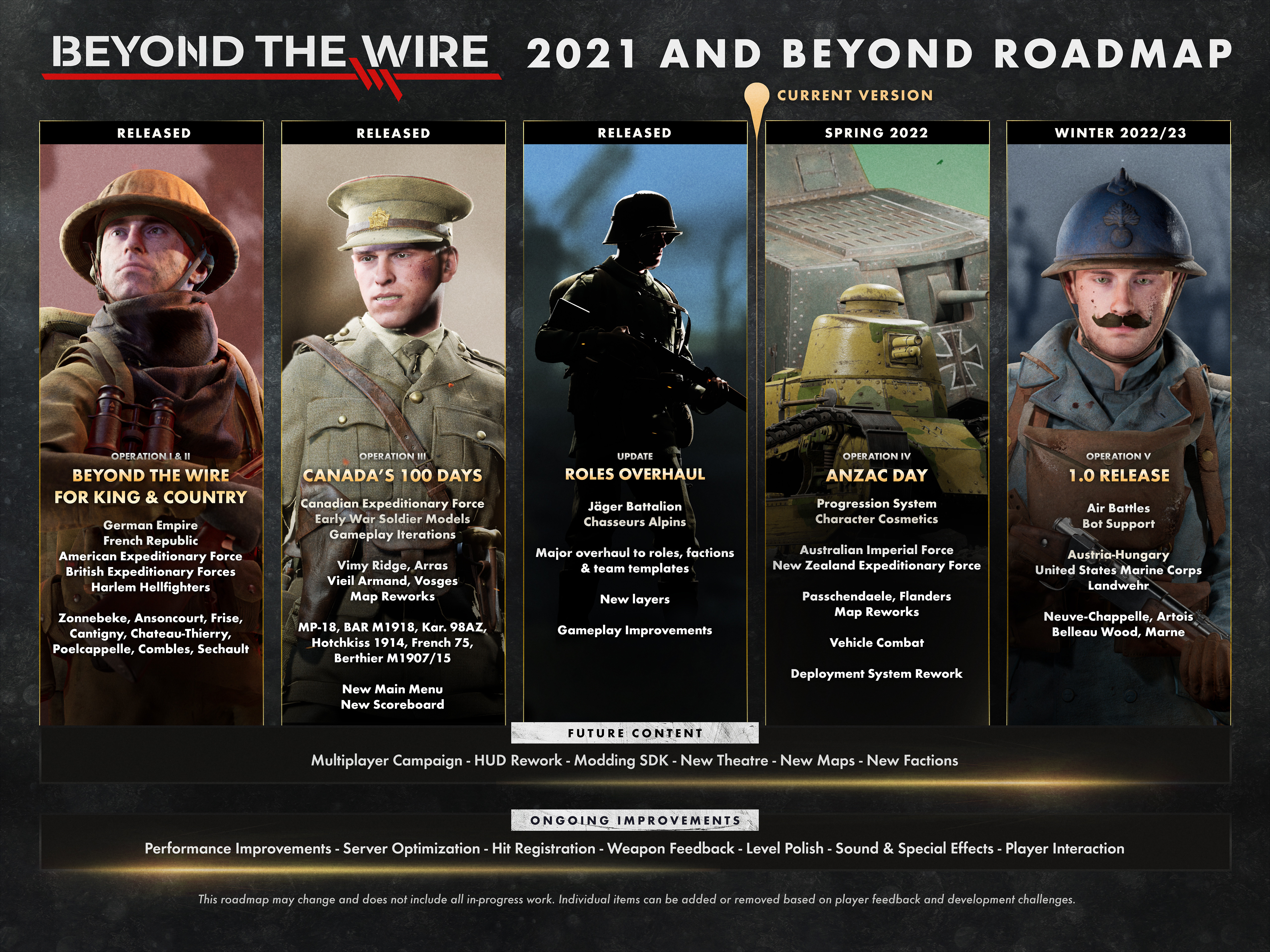 The next Operation for Beyond The Wire is now lining up to be our biggest update yet as we have already completed preparation work to introduce, perhaps, our most game-changing addition - tanks. When entering Early Access we were hesitant to commit to introducing vehicles and couldn't confirm whether we would have the capability to develop them in time for 1.0 release. Since then, we have been able to allocate some development time to explore their inclusion and our community's excitement at the confirmation of tanks was palpable. With teaser's dropping on our YouTube channel we were finally able to commit to their release with Operation IV, along with opportunities for additional vehicles in the future. Entering the fray will be the Mark IV, Renault FT-17 and A7V which we're expecting to change the landscape completely for Beyond The Wire. We will be aiming to keep these machines of war to the years they were involved and while we are still working out the details on how these will feature on our fields of battle, you can be assured they'll be as frightening and impactful as they were for the soldiers who faced them. Consideration for their inclusion has already started with the level and game design departments looking at changes needed to maps and teams, to both utilise and oppose them.

2022 will be a major year for Beyond The Wire as we introduce some of our biggest and most anticipated features yet which will add new experiences and further cement the gameplay loop, putting us in position ready to spring towards 1.0. As these systems are introduced we will continue our efforts to ensure we survey the communities sentiment and feedback, taking onboard the concerns and ideas you bring us through the various channels, forums and regular feedback surveys. The input our players have given us this year has been invaluable and the interaction between the Redstone team and community will continue to be the most important part of the development process - and we're excited to share this journey with you all.

As always your passion for Beyond The Wire is our main source of inspiration and everyone at Redstone would like to thank you all for this continued support as we work towards delivering the best World War 1 gaming experience to date. 2022 will be our biggest year yet, we can't wait to see you there...

Bots and Passchendaele release next week!